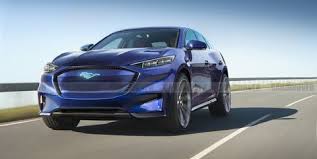 In late 2020, Ford intends to introduce its long-awaited, next-generation all-electric model, which will be the Mustang-inspired performance SUV.

According to what we know so far, which comes to us mainly via an Electrify America press release, there will be at least a few variants of the electric SUV.

UPDATE: Check out the latest new renders of this electric crossover below and at this link. These images are inspired by recent spy photos of the actual car.

The targeted EPA range is 300 miles (483 km), when equipped with an extended battery and rear-wheel drive. The European Ford press releases say up to 600 km (370 miles, says Ford) of range under the WLTP test cycle.

The most important conclusion is that there will be not only the extended battery but also simply a standard battery option, with less capacity, less range and priced more affordably.

In the case of drive, it was obvious from the start that the "performance" BEV requires use of a dual-motor all-wheel-drive system (with one electric motor per axle).

The latest official message confirms that there will be a rear-wheel-drive version too.

The charging power also was confirmed at 150 kW in the case of the extended battery version (the smaller pack probably will be rated at lower power).