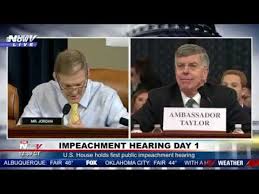 Behind the scenes, House Democrats were predicting a "phenomenal week," Fox News is told. At the same time, Republicans have been preparing a methodical and vigorous cross-examination of Democrats' witnesses, whose accounts of President Trump's alleged wrongdoing have been based largely on hearsay and intuition.

Capitol Hill security officials told Fox News they're not anticipating the kinds of organized protests that rocked the Supreme Court confirmation hearings of Brett Kavanaugh last year, but sources on both sides of the aisle have cautioned that the day will be unpredictable. The proceedings are to be held in the cavernous House Ways and Means Committee hearing room at the Longworth House Office Building.

With the bang of a gavel, Schiff will open the impeachment hearings Wednesday into Trump's alleged pressure on Ukraine to investigate 2020 presidential candidate Joe Biden's dealings in the country. The former vice president, a Democrat, has boasted about pressuring Ukraine to fire its top prosecutor, as his son Hunter Biden held a lucrative role board of a Ukrainian natural gas company despite having little relevant expertise.