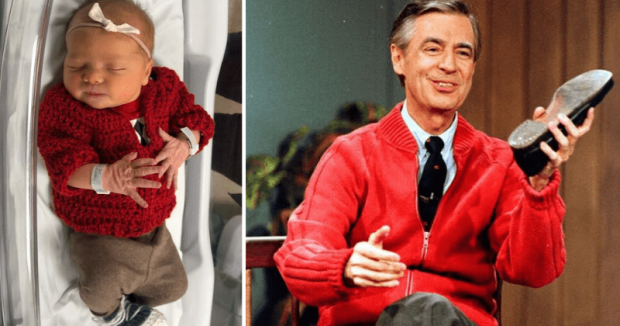 Yesterday was certainly a beautiful day in the neighborhood for this women's hospital in Pittsburgh.

In addition to November 13th being World Kindness Day, it is also celebrated as "Cardigan Day".

Since Fred Rogers might be one of the most compassionate television heroes in history—and the most iconic fan of the cardigan—the UPMC Magee-Women's Hospital honored the two holidays by dressing all of their baby patients in hand-knitted Mr. Rogers sweaters and booties.

All of the garments were made by hospital nurse Caitlin Pechin. Upon successfully dressing their newborn residents in the adorable Mr. Rogers costumes, the staffers invited the television star's widow Joanne Rogers to the hospital for a surprise.

Mrs. Rogers, who was married to Mr. Rogers for 51 years before he passed away in 2003, was delighted by the gesture.

Since the Pittsburgh hospital posted photos from the occasion to Facebook, thousands of people have shared them across social media.

"We welcomed Pittsburgh's newest neighbors in style for #CardiganDay!" wrote the hospital. "Big thanks to Mrs. Rogers for stopping by!"