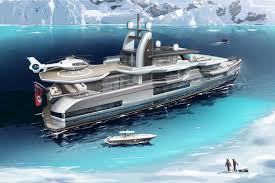 But if you really want to get out there — "thousands of miles offshore" out there — you'll need to leave the 4x4 camper outside the marina and proceed via explorer yacht. And if you want that explorer yacht loaded with toys for more closely examining land, air and sea, the new Xventure should prove immediately appealing.

The recently-unveiled concept yacht from Dutch shipyard Heesen Yachts and British studio Winch Design, the Xventure can journey to little-seen stretches of sea and coast, serving as a base camp for everything from scuba diving, to heli-skiing, to submarining.

The last time we saw the term "Xventure," it was the Schutt Xventure "severe-duty trailer," incidentally something of a go-anywhere toy hauler itself. The Heesen Xventure was born with a similar goal of off-grid, gear-supported exploration, albeit in a package that's about 15 times as long as Schutt's XV2 trailer ... and infinitely more comfy and luxurious.

The mission behind the Heesen/Winch collaboration was to "create the ultimate explorer yacht, conceived to take adventurous owners off the beaten path in seven-star comfort." Since only exterior renderings have been released, we can't say for sure that they nailed the "seven-star" comfort bit, but they definitely got the adventurous explorer part right.