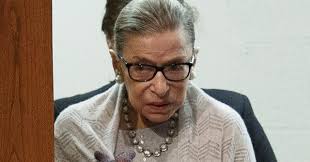 Chief Justice John Roberts said from the bench that Ginsburg, 86, was "indisposed due to illness" but would participate in the day's two cases based on the briefs and transcripts.

Ginsburg, a four-time cancer survivor, had actively taken part in the previous day's arguments, including a clash over President Donald Trump's bid to end a deferred-deportation program for 660,000 young immigrants.

Until this year, Ginsburg, the leader of the court's liberal wing, had never missed a Supreme Court argument because of illness. She skipped two weeks in January after having two cancerous growths removed from a lung. She later took part in the court's decisions in those cases.

Ginsburg has become a celebrity among liberals, inspiring movies, books and memes and drawing raucous applause at her public appearances. Some 16,000 people attended when she appeared in Little Rock, Arkansas, in September with former President Bill Clinton, who appointed her to the court in 1993.

The Political Circus and the Court

Barrett Tells Senate She Will Interpret Laws 'As They Are Written'

Joe Biden claims it's unconstitutional to follow the Constitution...

Another Phony Conservative Judge Nominated To The Supreme Court