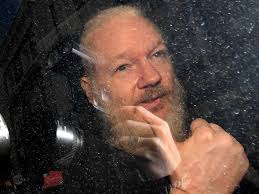 Assange mumbled, stuttered, and struggled to say his own name and date of birth when he appeared in court on October 21. The Wikileaks founder is being subjected to long drawn-out "psychological torture" as he battles to prevent his extradition to the United States where he faces a slew of espionage charges, warns Nils Melzer, the UN special rapporteur on torture and other cruel, inhuman or degrading punishment.

"Unless the UK urgently changes course and alleviates his inhumane situation, Mr. Assange's continued exposure to arbitrariness and abuse may soon end up costing his life," Melzer said in a statement on Friday.

"His physical appearance was not as shocking as his mental deterioration," writes former British ambassador Craig Murray, who was present at the October hearing. "When asked to give his name and date of birth, he struggled visibly over several seconds to recall both… his difficulty in making it was very evident; it was a real struggle for him to articulate the words and focus his train of thought… Until yesterday I had always been quietly skeptical of those who claimed that Julian's treatment amounted to torture… and skeptical of those who suggested he may be subject to debilitating drug treatments. But having attended the trials in Uzbekistan of several victims of extreme torture, and having worked with survivors from Sierra Leone and elsewhere, I can tell you that … Julian exhibited exactly the symptoms of a torture victim brought blinking into the light, particularly in terms of disorientation, confusion, and the real struggle to assert free will through the fog of learned helplessness."