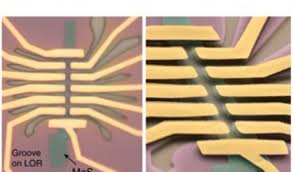 Ionic liquid
Ye and his collaborators studied a double layer of molybdenum disulfide: 'In that configuration, the interaction between the two layers creates new superconducting states.' Ye created a suspended double layer, with an ionic liquid on both sides that can be used to create an electric field across the bilayer. 'In the individual monolayer, such a field will be asymmetric, with positive ions on one side and negative charges induced on the other. However, in the bilayer, we can have the same amount of charge induced at both monolayers, creating a symmetrical system,' Ye explains. The electric field that was thus created could be used to switch superconductivity on and off. This means that a superconducting transistor was created that could be gated through the ionic liquid.