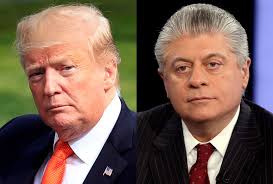 Not to his face, of course. But Tucker Carlson guest Joseph diGenova's dismissal of Napolitano for saying that soliciting campaign aid from a foreign government is against the law illustrates the awkward place that the former New Jersey Superior Court judge finds himself in at Fox during the Trump era.

Napolitano, who joined Fox News in 1998, has emerged as one of Donald Trump's bluntest critics on a network where the president expects to hear encouragement.

Napolitano has defended an impeachment inquiry that many Trump supporters call unfair, noting it follows rules written by Republicans. He said the White House counsel's arguments against the process were "profoundly misguided," and described Trump's since-withdrawn proposal to host a summit of world leaders at his Miami resort as a constitutional violation "about as direct and profound ... as one could create." He has questioned how seriously Trump takes his oath of office, and said he governs like a mafia don.

The commentator's assertion that Robert Mueller had found 10 instances of obstruction of justice that could have resulted in a criminal indictment if Trump hadn't been president earned him an angry tweet from the White House.

It was Smith, the since-departed Fox News anchor who occasionally fact-checked claims by Fox opinion hosts, who came to Napolitano's defense after diGenova's remark on Sept. 24. Smith called the attack repugnant.

"It just sort of rolls off my back," Napolitano said in an interview. "I realize that when you're in this business — and I'm on the opinion side, not the news side — that it's going to ruffle some feathers. I never take it personally."

He suspects his opinions have cost him airtime on Fox, although he says it can be cyclical. While he appears regularly on the "Fox & Friends" morning show, he's invisible on the prime-time opinion shows hosted by Carlson, Sean Hannity and Laura Ingraham. Many of his commentaries appear online, taped on the plaza outside of Fox's Manhattan headquarters.