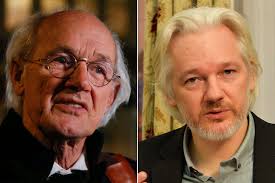 Instead, he is touring European capitals campaigning for his son, Wikileaks founder Julian Assange.

A parent's work is never done. John Shipton entering his ninth decade. He'd like to kick back, maybe learn a few recipes, stroll at a leisurely pace towards the declining years.

But his son needs him. His son's health is in serious danger and his future looks dark, with the prospect of spending decades, if not the remainder of his life, in prison.

His son is Julian Assange. It's a name that is familiar to most people, although many would, at this remove, find it difficult to couple his celebrity standing with his talent or achievement.

Assange is an Australian who has been a serious thorn in the side of the powerful. His Wikileaks organisation was responsible for disseminating information that showed what exactly the US and its allies were getting up to in foreign wars.

Wikileaks exposed war crimes. It was the receptor for whistleblower Chelsea Manning's treasure trove of documents that painted a picture of torture and maltreatment by US forces in Iraq, among other crimes.