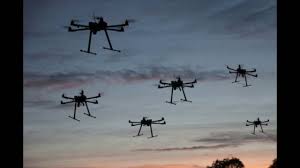 NASA Administrator Jim Bridenstine loves the idea. At the recent Commercial UAV Expo drone conference in Las Vegas, Bridenstine challenged the industry to get tens of thousands of daily drone flights over at least one US city by 2028. He also set out several "grand challenge" milestones to get us there, including a 2022 test flight with the cargo weight equivalent of at least one human passenger in simulated urban airspace.

Drone companies like Uber Elevate and Overwatch Imaging think drones will come even faster as innovations surge through the aerospace industry. The unmanned aircraft can deliver packages to hard-to-reach places, examine railway lines from overhead to ensure safety, survey construction sites and spray pesticide over crops to protect farms.

It won't be easy getting to a future buzzing with drones. One difficulty is moving from today's aviation safety regime, where certified pilots chat over the radio with air traffic controllers, to an automated airspace, where computers keep aircraft from colliding. Another hurdle is convincing people and politicians that the benefits of drones outweigh privacy intrusions and noise.