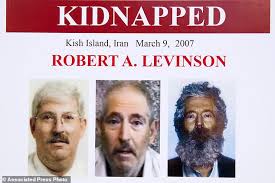 Iran is acknowledging for the first time it has an open case before its Revolutionary Court over the 2007 disappearance of a former FBI agent on an unauthorized CIA mission to the country.

In a filing to the United Nations, Iran said the case over Robert Levinson was 'on going,' without elaborating, but the development has renewed questions over what happened to him.

It wasn't immediately clear how long the case had been open, nor the circumstances by which it started.

However, it comes amid a renewed push to find him with an offer of $20 million for information from the Trump administration amid heightened tensions between Iran and the U.S. over Tehran's collapsing nuclear deal with world powers.

The money is in addition to $5 million that had been earlier offered by the FBI.

The Associated Press on Saturday obtained the text of Iran's filing to the U.N.'s Working Group on Enforced or Involuntary Disappearances.

'According to the last statement of Tehran's Justice Department, Mr. Robert Alan Levinson has an on going case in the Public Prosecution and Revolutionary Court of Tehran,' the filing said.