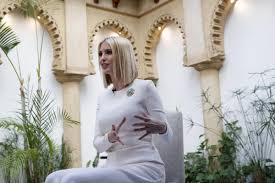 RABAT, Morocco (AP) — Ivanka Trump on Friday echoed her father's view that the House impeachment investigation is an attempt to overturn the 2016 election. But, in an interview with The Associated Press, she parted ways with President Donald Trump by calling the identity of the impeachment whistleblower "not particularly relevant."

The Republican president and some of his allies lately have been pressing the news media to publicize the whistleblower's name. Trump has also tweeted for the individual to "come forward." But Ivanka Trump said the person's motives were more important, though she declined to speculate on what they may have been.

"The whistleblower shouldn't be a substantive part of the conversation," she told the AP, saying the person "did not have firsthand information."

Of the individual's identity, she added that, "to me, it's not particularly relevant aside from what the motivation behind all of this was."

In a wide-ranging, 25-minute interview, Ivanka Trump also addressed her family's criticism of Democrat Joe Biden and his son Hunter, whether she wants four more years in the White House and the possible future sale of her family's landmark Washington hotel.

She said she shares her father's oft-repeated view that the impeachment investigation is about "overturning the results of the 2016 election." House Democrats counter that the inquiry is about whether Trump abused his office by putting his political interests first.