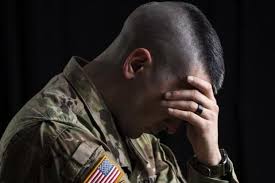 The article points out that "more than 45,000 veterans and active-duty service members have killed themselves in the past six years. That is more than 20 deaths a day — in other words, more suicides than the total American military deaths in Afghanistan and Iraq."

The article states: "Other than pointing to national trends, officials have offered few explanations for why military suicides are rising. Studies seeking more answers are underway."

Permit me to offer my explanation for this deadly phenomenon: Iraq and Afghanistan and other places where U.S. service members have been obeying orders to participate in military operations involving the wrongful killing of people.

One such veteran, Kayla Williams, actually held a gun to her head while contemplating killing herself. Another one, Marine Cobra gunship pilot John Ruocco, returned home tormented and killed himself.

2 Comments in Response to Military Suicides Shouldn't Surprise Anyone

Who raised those "military veterans"?