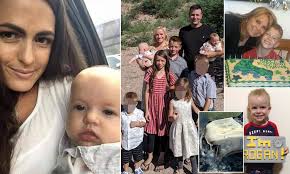 Harrowing new details have emerged in the slaughter of three Mormon mothers and six of their children after cartel gunmen opened fire in a grisly ambush in Mexico on Monday.

Nine members of the LeBaron family were attacked eight miles apart on Monday while traveling in a convoy of three SUVS on a dirt road.

One hero mother died shielding her seven-month-old daughter who survived, it has since emerged. And a 13-year-old boy hid his siblings from gunmen in bushes and walked 13 miles for help, loved ones say.

Police confirmed they have arrested a suspected drug lord after the killings which left one vehicle torched and riddled with bullets.

The state prosecutor's office said one person was detained on Tuesday in the Mexican border state of Sonora and they were investigating whether they were involved in the massacre.

The mothers were driving in separate vehicles with their children from the La Mora religious community where they live, which is a decades-old settlement in Sonora state founded as part of an offshoot of The Church of Jesus Christ of Latter-day Saints.