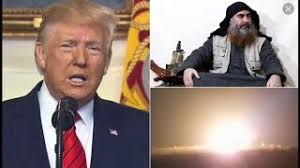 My critic said that since the deaths of the three children were caused by the suicide bombing by ISIS head Abu Bakr al-Baghdadi, the U.S. troops who were doing the raiding could not be held responsible for their deaths by any stretch of the imagination.

Actually, however, the thrust of my article wasn't about the issue of responsibility. It simply was designed to ask a simple question: Were the deaths of those three children worth getting Baghdadi?

In other words, let's look at the situation another way. Suppose when the operation was being planned, the planners concluded that it was a virtual certainty that three children would be killed in the operation. Knowing that, would that price inhibit the planners from engaging in the raid?

The answer is no. Getting Baghdadi was the prime objective, and no price in terms of foreign life  would be considered too high to get him. Even if it had been 20 children or 100 children who would be killed in the operation, the deaths, while difficult, would still have been considered worth it.