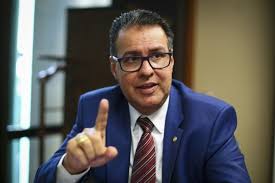 Brazil is caught in a "civil war" of crime and violence, the head of Congress' pro-gun faction says, warning that ordinary Brazilians need to be armed and ready to fight back.

Wearing an electric blue suit with matching glasses, and a heavy gold ring with the seal of Congress on his finger, Jose Augusto Rosa is both a high-profile lawmaker and a reserve captain in Sao Paulo's gendarme-style military police.

Capitao Augusto, as he is universally known, heads the so-called "Bullet Caucus," the assembly's pro-gun faction whose ranks swelled from 36 deputies to around 100 with the populist wave that brought far-right President Jair Bolsonaro to power in 2018.

"Isn't this war?" asks the 53-year-old during an interview with AFP, referring to the 57,000 homicides every year in a country whose population is roughly 209 million.

"We are in a civil war. We have to fight back against this violence, and that unfortunately doesn't mean sending flowers" to criminals, said Augusto, a member of Brazil's center-right Liberal Party who says he owns a revolver and a pistol.

For the captain, there is no doubt -- more weapons in the hands of "good people," tougher sentences for criminals and more muscular police operations will bring down the death toll in one of the most violent countries in the world.

"With nothing but our rhetoric we managed to cut the crime rate by 22 percent," he says. "Why that drop? The only significant factor was the election of a government that is ready to toughen up the penal code," he says.

Augusto is the head of a congressional committee that is backing a controversial "anti-crime package," submitted in February by Justice Minister Sergio Moro and which has been languishing there ever since.

He hopes the bill will be approved this month despite lively criticism from the left and from NGOs. The bill toughens prison sentences and broadens the definition of self-defense both for law enforcement officers and for the population at large.

"With this bill, we will reduce crime and the population of overcrowded prisons," he says with his trademark machine-gun delivery, scrolling through WhatsApp messages on his phone to keep up with the debate within his Committee on Public Security and Combating Organized Crime.

"People on the margins of society will think twice about committing crimes" if they know that "if they kill someone they'll go to prison for 15 years with no furloughs or conjugal visits and without any chance of getting a semi-open regime."