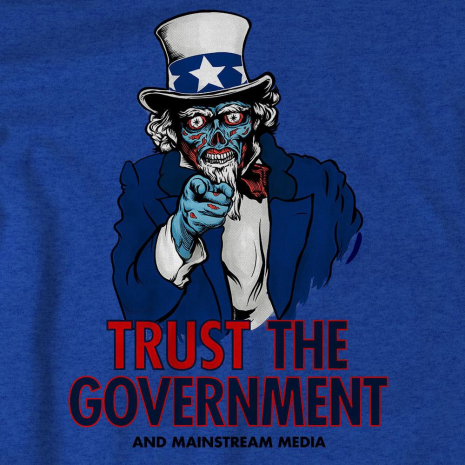 "You see them on the street. You watch them on TV. You might even vote for one this fall. You think they're people just like you. You're wrong. Dead wrong." — They Live

We're living in two worlds, you and I.

There's the world we see (or are made to see) and then there's the one we sense (and occasionally catch a glimpse of), the latter of which is a far cry from the propaganda-driven reality manufactured by the government and its corporate sponsors, including the media.

Indeed, what most Americans perceive as life in America—privileged, progressive and free—is a far cry from reality, where economic inequality is growing, real agendas and real power are buried beneath layers of Orwellian doublespeak and corporate obfuscation, and "freedom," such that it is, is meted out in small, legalistic doses by militarized police armed to the teeth.

All is not as it seems.

This is the premise of John Carpenter's film They Live, which was released more than 30 years ago, and remains unnervingly, chillingly appropriate for our modern age.

Best known for his horror film Halloween, which assumes that there is a form of evil so dark that it can't be killed, Carpenter's larger body of work is infused with a strong anti-authoritarian, anti-establishment, laconic bent that speaks to the filmmaker's concerns about the unraveling of our society, particularly our government.

Time and again, Carpenter portrays the government working against its own citizens, a populace out of touch with reality, technology run amok, and a future more horrific than any horror film.

In Escape from New York, Carpenter presents fascism as the future of America.

In The Thing, a remake of the 1951 sci-fi classic of the same name, Carpenter presupposes that increasingly we are all becoming dehumanized.

In Christine, the film adaptation of Stephen King's novel about a demon-possessed car, technology exhibits a will and consciousness of its own and goes on a murderous rampage.

In In the Mouth of Madness, Carpenter notes that evil grows when people lose "the ability to know the difference between reality and fantasy."

And then there is Carpenter's They Live, in which two migrant workers discover that the world is not as it seems. In fact, the population is actually being controlled and exploited by aliens working in partnership with an oligarchic elite. All the while, the populace—blissfully unaware of the real agenda at work in their lives—has been lulled into complacency, indoctrinated into compliance, bombarded with media distractions, and hypnotized by subliminal messages beamed out of television and various electronic devices, billboards and the like.

It is only when homeless drifter John Nada (played to the hilt by the late Roddy Piper) discovers a pair of doctored sunglasses—Hoffman lenses—that Nada sees what lies beneath the elite's fabricated reality: control and bondage.

When viewed through the lens of truth, the elite, who appear human until stripped of their disguises, are shown to be monsters who have enslaved the citizenry in order to prey on them.

Likewise, billboards blare out hidden, authoritative messages: a bikini-clad woman in one ad is actually ordering viewers to "MARRY AND REPRODUCE." Magazine racks scream "CONSUME" and "OBEY." A wad of dollar bills in a vendor's hand proclaims, "THIS IS YOUR GOD."

1 Comments in Response to They Live, We Sleep: Beware the Growing Evil in Our Midst

"Most people prefer to believe that their leaders are just and fair, even in the face of evidence to the contrary, because once a citizen acknowledges that the government under which he lives is lying and corrupt, the citizen has to choose what he or she will do about it. To take action in the face of corrupt government entails risks of harm to life and loved ones. To choose to do nothing is to surrender one's self-image of standing for principles. Most people do not have the courage to face that choice. Hence, most propaganda is not designed to fool the critical thinker but only to give moral cowards an excuse not to think at all." ~ Michael Rivero

Air Force Surgeon: It's Your 'Duty' to Get COVID Vaccine