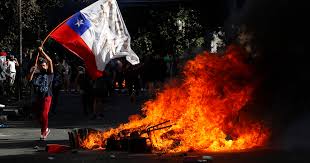 Almost one million protesters took to the streets of Chile yesterday and stayed through the night in the biggest demonstrations since violence broke out in the capital a week ago.

So far at least 18 people have been killed, hundreds wounded, and millions of dollars worth of damage has been caused.

Demonstrators waving national flags, blowing whistles and horns, wafting incense and bearing placards urging political and social change streamed through the streets, walking for miles from around Santiago to converge on Plaza Italia.

The scenes were replicated in cities around the country.

Traffic ground to a standstill in Santiago as truck and taxi drivers added their own protest over road tolls and public transport shut down early ahead of marches that grew throughout the afternoon.