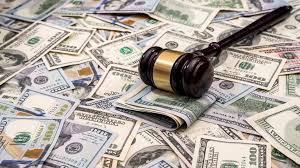 Something that began in the United States as a way to punish wrongdoers located elsewhere in the world, but whose property (usually a ship and its contents) had sailed into US jurisdiction, is now used by American law enforcement to take cash, vehicles, and whatever else they can haul away from people they think smell like weed.

The US government followed British law for its take on asset forfeiture. And yet, it was hardly ever used until the 20th century. Things ratcheted up during Prohibition, then faded away again. The New Prohibition -- the never-ending Drug War -- brought it back. And it's bigger than ever, despite the public's growing awareness that most of what's called "civil asset forfeiture" is just legalized theft.

The Supreme Court of the United States said one state's forfeiture program was unconstitutional. Citing the Eighth Amendment's protection against excessive fines, the Court said a program that allows cops to take a $42,000 vehicle from a person charged with a crime that only generates a $10,000 maximum fine is unconstitutional. This was criminal asset forfeiture -- there was a conviction involved -- but the ruling seemed to signal seizures where no criminal charges are brought would make any amount excessive.