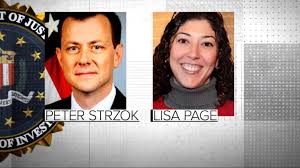 More damning communications that center on a "crescendo of leaks."

The Republican lawmakers are asking Intelligence Community Inspector General Michael Atkinson to explain why he hasn't said if an investigation into a number of leaks of highly sensitive information is underway, according to Fox News.

The inquiry comes as U.S. Attorney John Durham's investigation of the investigators "has transitioned into a full-fledged criminal investigation, enabling Durham to subpoena witnesses and file charges," Fox News reported. Department of Justice Inspector General Michael Horowitz also announced on Thursday his report on possible surveillance abuses is set to be released soon.

Sens. Johnson and Grassley pointed to a specific text from Strzok to his lover at the time, bureau attorney Lisa Page on Dec. 15, 2016.

"Think our sisters have begun leaking like mad. Scorned and worried and political, they're kicking in to overdrive," Strzok said.

"What are they worried about, and what are they kicking into 'overdrive?'" asked the senators in a letter to Atkinson. "Who are the 'sisters,' and what does it mean to say that the 'sisters have [been] leaking like mad?'"