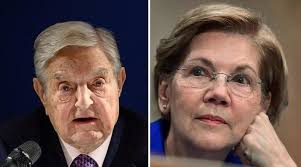 In a wide-ranging interview with the New York Times, the progressive billionaire predicted that Senator Elizabeth Warren of Massachusetts will become the Democratic nominee who will face Trump in 2020.

"She has emerged as the clear-cut person to beat," he said. "I don't take a public stance, but I do believe that she is the most qualified to be president."

Soros quickly added that his comments were not an endorsement of Warren, saying "I'm not endorsing anybody because I want to work with whoever, " adding "I don't express my views generally because I have to live with whoever the electorate chooses."

When the Times' Andrew Ross Sorkin pointed out that the ultra-wealthy, including his Wall St. peers think Warren's taxation of the rich and tight regulatory plans for banks would be a giant threat to the "capitalistic system in which he made his riches," Soros said he disagreed - reiterating his support of a wealth tax.

"I am in favor of taxing the rich," said Soros, "including a wealth tax."