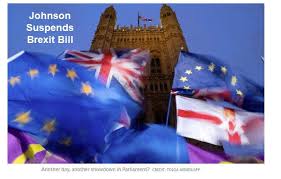 Boris Johnson has confirmed he will set aside the bill that would implement his deal, despite the fact the Commons has just backed it, after his proposal to fast-track it through parliament was rejected by MPs.

He says he does not want a delay and will continue to discuss with EU27 leaders until they decide whether or not to grant one.

Supposedly the EU would never remove the backstop.

Supposedly the EU would never change the political declaration

None of those happened.

Can I say in response how welcome it is, even joyful that for the first time in this long saga, this House has actually accepted its responsibilities together, come together, and embraced a deal?

I congratulate honourable members across the House on the scale of our collective achievement because, just a few weeks ago, hardly anybody believed that we could reopen the withdrawal agreement, let alone abolish the backstop, that is indeed what they were saying.