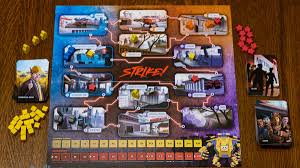 A national labor organization and publisher of activist board games have launched a campaign on Kickstarter to fund a new game about organizing labor movements to rebel against corporate consolidation. In the game, STRIKE!: The Game of Worker Rebellion, "players will grow their ranks, mobilize workers, and organize strikes around their city."

The campaign for the board game, which creators describe as a "completely and unabashedly a pro-labor rights game," arrives, ironically, at a moment when Kickstarter employees are in the midst of their own bitter union drive.

Within two weeks in September, two of Kickstarter's union's lead organizers were fired and a third phased out. Now the company, which has situated itself as a progressive outlier from Silicon Valley tech companies, faces a federal complaint for allegedly retaliating against union organizers, and has declined the union's request for voluntary recognition. Kickstarter's newly appointed CEO Aziz Hasan has denied that the firings were related to union organizing, but said that a "union framework is inherently adversarial."

At a tense company-wide meeting on October 9, union members held signs reading "Card Checks Are Democratic" and "Recognize Kickstarter United," while top leadership presented at the company's headquarters in Brooklyn and welcomed a new board member, according to a current Kickstarter employee who wished to remain anonymous. Kickstarter's union would be the first white collar union at a major tech company in the United States.