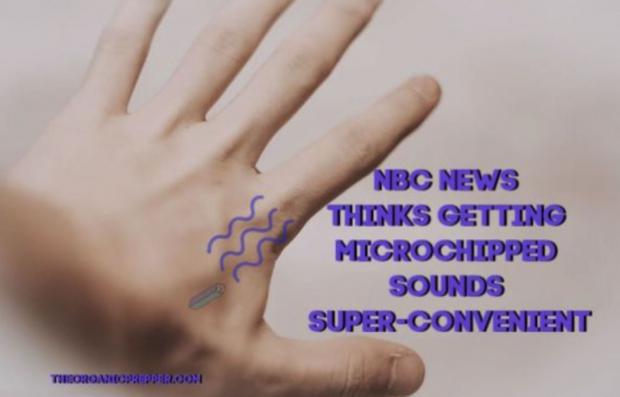 We've written numerous times before about the upcoming push for personal microchips on this website. Thousands of people in Sweden are voluntarily getting "chipped." Daisy Luther wrote that many Americans wouldn't be far behind." And experts have claimed that one day in the not-too-distant future that "everyone" will be microchipped.

And it looks like the push is on. A while back, Brandon Turbeville wrote about the UK's pro-microchipping coverage. And now, NBC News published a pro-microchipping video, gushing over the "convenience" of having your keys, your money, and your ID all placed in your hand in a device about the size of a grain of rice.

Are we literally at a place in humanity in which carrying a wallet is too much trouble? Heaven help those who feel that way if they ever have to acquire their own food and water.

This would certainly take stealing your wallet to an entirely new level. Would thieves just hack off a person's hand to gain access to their keys, credit cards, and ID? Or would it be even easier than that?

Considering we now need to carry our passports and credit cards in RFID-blocking wallets because criminals can walk around with scanning devices and steal our unprotected information. Will those with chips need to wear an RFID-blocking glove, ala Michael Jackson?

And how much more information will they put on microchips? Today, it's your keys, your money, and your identification. Tomorrow will it be GPS trackers placed in children and the elderly? Then trackers in the rest of us because if we don't have anything to hide, we shouldn't have anything to worry about?

And how long before your medical information, personal history, and even your social media access will be able to be scanned by interested parties? Newer cell phones already use biometric ID, which could be forcibly used to unlock your devices by authorities or others with bad intent.

Just how far will microchipping go?

What do you think about the idea of having a microchip implanted? What type of information do you think could be placed on these chips? How soon do you foresee being "chipped" becoming mandatory to have a driver's license, access to medical care, or a bank card?