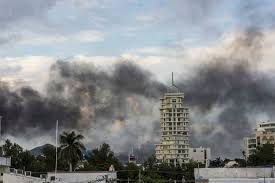 The southwest U.S. border might be quieter now than it was this spring at the height of the migrant crisis, but south of the Rio Grande the Mexican state is disintegrating.

Last Thursday in the city of Culiacan, the capital of Sinaloa state, a battle erupted between government forces and drug cartel gunmen after the Mexican military captured two sons of jailed drug kingpin Joaquin "El Chapo" Guzman. The elder son, Ivan, was quickly freed by his men, who overpowered government forces and secured his release. Ivan then launched an all-out siege of the entire city in an effort to free his younger brother, Ovidio.

Armed with military-grade weapons and driving custom-built armored vehicles, cartel henchmen targeted security forces throughout Culiacan, launching more than one dozen separate attacks on Mexican security forces. They captured and held hostage eight soldiers, then kidnapped their families. Amid the fighting, an unknown number of inmates escaped from a nearby prison. At least eight people were killed and more than a dozen were injured.