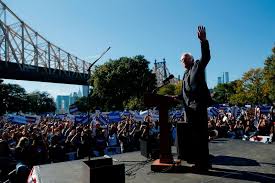 The socialist, Democratic party congresswoman, Alexandria Ocasio-Cortez, was on hand to endorse Sanders.

"It wasn't until I heard of a man by the name of Bernie Sanders that I began to question and assert and recognize my inherent value as a human being," AOC told the crowd.

Notes Politico, "Sanders' aides believe that Ocasio-Cortez's endorsement will not only excite his current voters, but also broaden his appeal among young voters, people of color, and women who are not yet behind him. She is expected to campaign for him soon in the first-in-the-nation caucus state of Iowa."

Bernie laid it on thick, he probably did better than Lenin back in the day.