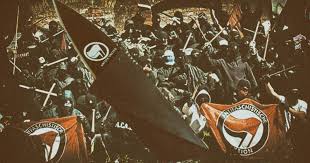 Antifa is "mobbing up" for an engineered chaos event, according to multiple eyewitness accounts of Antifa activities at public events such as Trump rallies. This coincides with accelerated mainstream media calls for Trump to be removed from power or arrested, along with an explosion in pop culture messaging that calls for Trump to be hogtied, tortured and / or executed. The coordinated messaging and accelerating George Soros funding of mob-for-hire Antifa terrorists points to an imminent event that will unleash nationwide political, civil and financial chaos from which globalists hope to remove Trump from power (or collapse the United States if Trump survives).

This analysis is derived from multiple personal interviews, eyewitness accounts, media sources (cited below) and informed familiarity with the history of the communist playbook from which these events are unfolding. Highlights of this analysis:

A sudden increase in the number of paid Antifa terrorists is now being observed in multiple cities across the United States.

The increased recruitment of Antifa mobs coincides with a coordinated media campaign to incite mass violence against Trump supporters and the President himself.

Deep state operatives such as James Clapper and John Brennan — who masterminded the criminal plot to undermine democracy and overrule the 2016 election — are now "lawyering up" as Bill Barr's DOJ actions rapidly approach. This speaks to the desperation and urgency of the deep state to initiate mass chaos within weeks.