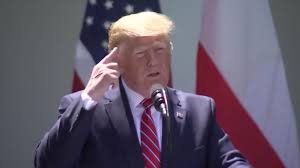 President Trump demanded that 'shifty' Adam Schiff be deposed Sunday, calling the chairman of the House Intelligence Committee, one of the panels investigating impeachment, 'corrupt' and 'a fraud'.

"I demand his deposition," Trump said.

"He is a fraud, just like the Russia Hoax was, and the Ukraine Hoax is now. When do the Do Nothing Democrats pay a price for what they are doing to our Country, & when do the Republicans finally fight back?"

The President also hit out at Nancy Pelosi for leading a congressional delegation to Jordan to inquire about Syria.

Trump said that if she wants answers on Syria, Pelosi should look to what Obama did.

Others charged that Pelosi and Schiff are violating The Logan Act with the trip to Syria.

The law criminalizes negotiation by unauthorized persons with foreign governments having a dispute with the United States.