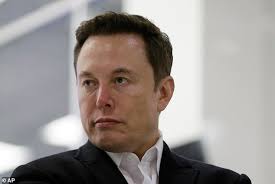 Billionaire entrepreneur Elon Musk may be feeling the heat – after the brother of drug kingpin Pablo Escobar claimed he stole his idea for a 'novelty' flamethrower.

Tesla founder Mr Musk has sold 20,000 of the devices at £385 a throw. Its brand name is Not-a-Flamethrower, a ruse to avoid customs regulations.

But Roberto Escobar, 72 – an accountant for his brother, who was shot dead by police in Colombia in 1993 – claims he had discussed the invention with an engineer employed by Mr Musk in 2017.

He is suing the businessman for £77million, saying: 'Elon Musk is a person that betrays people.'

Mr Musk is facing a separate claim for damages over comments he made about British diver Vernon Unsworth, 63, who rescued 12 Thai children from a flooded cave last year.

Last month, Mr Musk unveiled a rocket that he believes will fulfil his dream of taking astronauts to Mars.