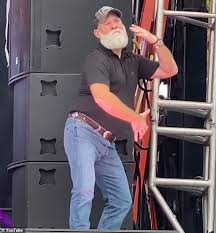 A sign language interpreter has captured the hearts of millions after he was filmed expressively signing at a concert during Atlanta's Pride celebrations.

David Cowan, who is deaf himself, became a viral star after deaf model and Dancing With the Stars winner Nyle DiMarco shared a video of the moment on Twitter, writing: 'Sign language interpreter at pride ATL is [fire emoji].'

The clip, which was filmed by Jeremy Turner of Team Turner Real Estate, shows the American Sign Language (ASL) interpreter translating Beyoncé's 'Get Me Bodied' while energetically moving to the music.

Fans were quick to identify Cowan in the comments of DiMarco's tweet as it turns out he is already a prominent star in the Atlanta deaf community.

Two years ago, he became the first deaf person to be named Grand Marshal of Atlanta Pride after working as an interpreter at the celebration since 2000.

Cowan is also an ASL interpreter for politicians in the state, including Rep. John Lewis and Gov. Brian Kemp. Just last month, he signed the ?Georgia governor's press conference on Hurricane Dorian at GEMA.