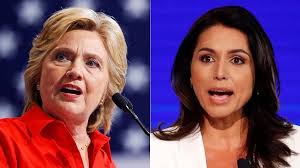 "If you stand up to the rich and powerful elite and the war machine, they will destroy you and discredit your message...," says Gabbard, who said she's suffered smears "from day one of this campaign."

In a Sunday tweet accompanied by a video which has nearly 450,000 views on Twitter (and 18,000 on YouTube) as of this writing, Gabbard writes "Hillary & her gang of rich, powerful elite are going after me to send a msg to YOU: "Shut up, toe the line, or be destroyed." But we, the people, will NOT be silenced."

"I'm not making any predictions but I think they've got their eye on somebody who is currently in the Democratic primary and are grooming her to be the third-party candidate," Clinton said, in apparent reference to Gabbard, a Hawaii Army National Guard major who served in Iraq. "She's the favorite of the Russians. They have a bunch of sites and bots and other ways of supporting her so far."

What the Hell is Going On?: Hunter Biden Documents Suddenly Reappear

There ARE Reasons To Vote For Joe Biden, So What On Earth Are They??