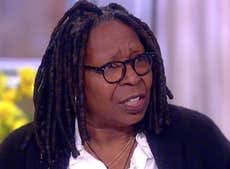 And while she hasn't exactly offered up a late-life conversion to the "right" side of the aisle just yet, she just praised Fox News.

During a discussion of allegations in Ronan Farrow's new book that NBC News tried to cover up rampant sexual harassment within the company, Goldberg pointed to another network facing similar allegations that didn't run and hide.

As she pointed out, the network let go of some of its biggest names in the "purge" after sexual harassment allegations surfaced, including TV icon Roger Ailes and top-rated host Bill O'Reilly.

"You have to be willing to purge," Goldberg said, adding that's what's made Fox News different here in the "Me Too" era. "They were willing to do that."

While it's doubtful the comments mean Goldberg is going to be a regular "Hannity" viewer anytime soon, she has in recent months taken more than a few positions that raised eyebrows among her leftist followers.

Last month, she lit into liberal actress Debra Messing, who had called for a list of entertainment figures who support Trump.

"I have the right to not go see (pay for) a movie with someone supporting babies in cages," Messing wrote on Twitter. "It is First Amendment. Information, Knowledge. That is how we make decisions."

Goldberg wasn't having it.