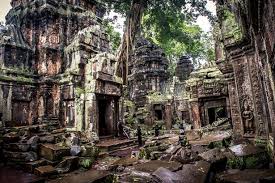 The ancient city of Mahendraparvata, which means Mountain of Indra (King of Gods), was thriving well over a thousand years ago and is thought to have been the first capital city of the Khmer Empire.

But efforts to locate the remains of the mysterious city have been unsuccessful, with scientists even disagreeing on where they should be looking for it.

The team used state-of-the-art Lidar laser scanning techniques to pinpoint the location of the city, which dates back to the 9th Century and is located to the north-east of the city of Angkor.

Discussing the amazing find, archaeologist Jean-Baptiste Chevance, of the Archaeology and Development Foundation in the UK, wrote in a paper: "The mountainous region of Phnom Kulen has, to date, received strikingly little attention.

"It is almost entirely missing from archaeological maps, except as a scatter of points denoting the remains of some brick temples."