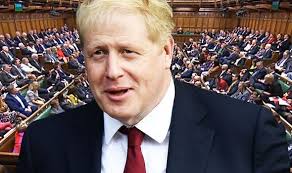 BORIS Johnson is embarking on a 24-hour charm offensive today to sell his "great new" Brexit deal to Tories and Labour rebels.

The PM faces a frantic race against time ahead of Saturday's showdown in the Commons, after the DUP vowed to vote down his agreement and begged Tory MPs to stand with them.

The PM will spend the day hammering the phones to MPs in a last-ditch attempt to push his Brexit plans over the line tomorrow.

He needs a handful of ex-Tory MPs, hardline Tories and Labour Leavers to back him in order to seal Brexit's fate.

The PM needs the support of Labour Brexiteers - with 10 ready to enrage Jeremy Corbyn by pushing the deal through, the Huffington Post reports.