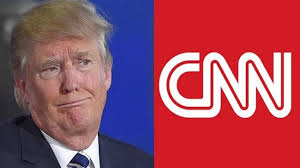 In a four-page letter to CNN, Zucker, and Executive Vice President David Vigilante, Trump attorney Charles J. Harder cited years of anti-Trump bias at the network and claimed the cable giant has broken its promise of "excellence in journalism."

Listing several examples from the just-released Project Veritas videotapes of CNN insiders describing Zucker's demand for "impeachment above all else," Harder wrote that they "are merely the tip of the iceberg of the evidence my clients have accumulated over recent years."

He added, "Never in the history of this country has a President been the subject of such a sustained barrage of unfair, unfounded, unethical and unlawful attacks by so-called 'mainstream' news, as the current situation."

Harder represents both Trump and the campaign. The letter was provided exclusively to Secrets and is shown in full below.

While media is typically protected by the First Amendment, Harder said the bias he cited at CNN was a violation of the Lanham Act "by constituting misrepresentations to the public, to your advertisers, and to others" to distribute "truly fair and balanced" news.