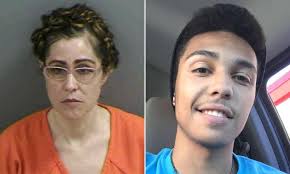 A Florida mom-of-two is facing a life sentence after she was found guilty of shooting dead a teenager over claims he molested her six-year-old daughter.

Connie Serbu, 43, of East Naples, was convicted of second-degree murder by a jury on Thursday, for the 2016 shooting death of Xavier Sierra.

Jurors delivered their verdict after a week-long trial, where prosecutors said that Serbu wanted revenge after her daughter told a babysitter that Sierra had touched her inappropriately.

At the time, she was six and Sierra was about 12 or 13, reports the Naples Daily News.

The entire murder plot began to unfold on May 30, 2016, when Serbu's daughter revealed that Sierra, a family friend, had a molested her five years prior.

Her daughter's allegations reportedly enraged Serbu, a married mom, who began to plot her retaliation.

On June 1, 2016, Serbu reached out to Sierra and asked the recent high school graduate to help her assemble a bunk bed for 'easy money.'