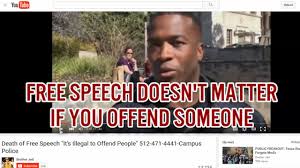 If you live in America, please note, this just happened here.

Younger generations are being brainwashed that the only thing more dangerous than our Second Amendment is our First. They are being socially engineered to believe that it is literally a crime for anyone to offend them. They are being taught that they can run to a police officer and tattle like a bratty five year old if someone hurts their feelings and that the offender will actually suffer legitimate criminal prosecution for committing such a high crime.

The rest of us who haven't been sucked into the progressive education system that promotes trigger warnings, make believe microaggressions, and magical "safe spaces" know this isn't how reality works. There's no such whimsical fairy land where everyone holds hands and sings Kumbaya on every point and not a single person gets their feelings hurt ever.

In fact, if such a world existed, not only would it be dreadfully dull but eventually feelings would cease to exist, because people would forget how to have them. But I digress…