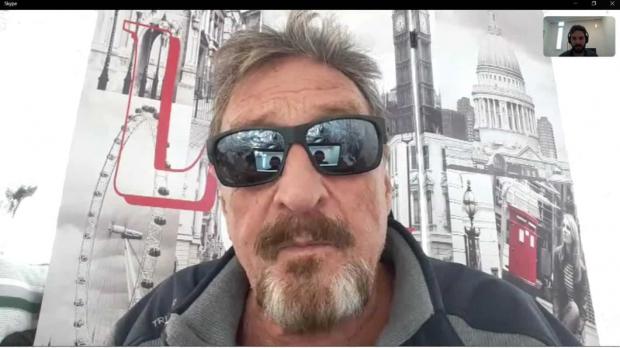 John McAfee – some see him as a legend, some see him as the most controversial figure in the crypto space. For sure, books will be written about his past decade: from his time in Belize to the prison in Guatemala, his US presidency campaign and his endless activities surrounding the cryptocurrency space.

This interview was supposed to be conducted live at the recent Blockchain Cruise back in June. However, John McAfee couldn't attend since he was in jail at the time.

So he spoke with us remotely, from what he calls "the cage". "I've been on the run for almost five months." According to him, his cage is designed to remain hidden. "No signals can get in or out; we have signal jammer devices to ensure it."

Before our interview, McAfee's wife, Janice, set up a press wall containing photos from around the world including the White House and the London Eye. It accomplished the dual purpose of obscuring the location of their "cage" while giving the feeling of an outdoor environment.

"They're going against me, but they can't find me. Nobody can find me in a cage in some unknown place in the world specifically so that I can do what I'm doing: building a distributed exchange that can't be shut down. Do you understand? This is the world we live in. If you're going to do things like I'm doing, you'd better be prepared to go underground. You'd better be prepared for the SEC to come."

From "the cage", McAfee manages his team and develops his ideas. His most recent one is McAfeeDEX, a decentralized exchange.

McAfee believes in anything that poses a threat to central authorities like governments, and he preaches personal responsibility. "You're responsible for your choices. I don't think no central authority needs to get rid of anything, including alcohol, weed or crypto scams like ZombieCoin." (McAfee received $4.5 million to evaluate the latter's whitepaper and deemed it a shitcoin.)

"If there's somebody who is foolish, whose job is it to take care of that person? That person's. And through their foolishness, if they have any sense at all, they'll learn from the mistakes that they make. Good God, you can't protect people from life and I'm certainly not going to do it."

McAfee: I Don't Own Any Bitcoin Myself

Telling us about his first days in crypto, McAfee heard about Bitcoin back in 2011 thanks to a coworker, the programmer Jim Zoromski. The latter came to visit while McAfee was living in Belize ("sunbathing on my sail yachts") and told him about his Bitcoin mining hobby. Back then, you could mine Bitcoin using your PC's graphics card. "At first I thought that was stupid. But then I read [Bitcoin's] white paper and I understood it. It's mathematically coherent, it's unstoppable."

And at what price did he buy his first Bitcoin? Surprisingly, McAfee claims not to own any. "I never buy anything myself."

What's more, he considers Bitcoin "ancient". "I am not a Bitcoin maximalist. I don't know what the maximalists are thinking. I mean, there's zero privacy in Bitcoin. Bitcoin doesn't have smart contracts, and Jesus, there's nothing. It's an ancient, arcane technology and yet it's still going to be worth a fortune."

"As a store of value and cryptocurrency, it's the standard. However, it does not do much that the world needs from blockchain today. It's simply a cryptocurrency."

McAfee has kinder words for alternative cryptocurrencies. "The altcoins are obviously where the real action is, and there are some super brilliant people there. Things like DAI (by MakerDAO), the only real stablecoin. It never varies more than 1% up or down from the US dollar. And I dabbled in it, I've been watching it, and it's astonishingly based on smart contracts."