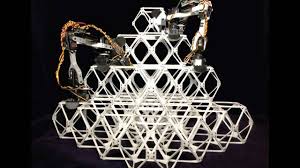 Researchers from MIT have created prototype assembly robots that can build small structures on their own or work together to create bigger ones.

The idea behind Benjamin Jenett's doctoral thesis is that, instead of producing components at separate locations and shipping them to a different manufacturing plant for final assembly, the whole thing could be constructed in the same place by small robots from a pool of identical pieces. These so-called Assembler Robots have been dubbed BILL-E (Bipedal Isotropic Lattice Locomoting Explorer) and could find applications in aircraft construction, bridge building and might even erect whole buildings from the ground up.

Working with Amira Abdel-Rahman, Kenneth Cheung (who now works for NASA's ARMADAS project that's looking at designing robots to build a lunar base) and Professor Neil Gershenfeld of MIT's Center for Bits and Atoms, Jenett has now reached the prototype stage of development.

The robots take the form of a hinged arm with grippers at either end to clamp onto three-dimensional blocks or units – called voxels – that are used to build the structures. These voxels serve as the construction equivalent of pixels in an image, with an object being built up one voxel at a time to create a complete structure.