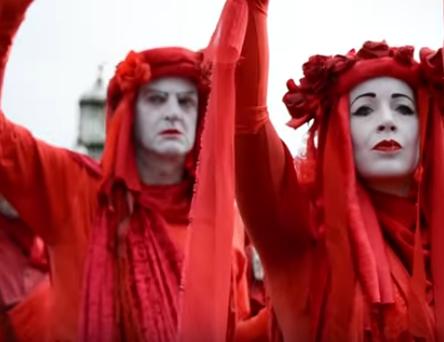 In the past week, over 1,300 arrests were made involving members of the Extinction Rebellion, a climate-change-alarmist group that is critical of the West and has blocked roads and shut down a London airport. George Soros is among the high-profile donors to this group. The Mail on Sunday revealed documents showing that activists have been paid over $88,000 during a four-month span and more than $253,000 since the founding of the group. Extinction Rebellion's finances have come under scrutiny as the group has paid no taxes on the money it has paid to its activist members. [These so-called activists are paid actors. You don't have to pay people to support a cause in which they truly believe. It's all political theater, folks.] -GEG

Extinction Rebellion protestors are paid up to £400 per week to "shut down" Britain, according to documents revealed by a British newspaper.

Documents revealed to The Mail on Sunday show that the far-left climate change alarmist group has paid activists over £70,000 during a four-month span and more than £200,000 since the founding of the group.

The list of financial backers of 'XR' is not made fully public, but some high profile elite donors include 'master of puppets' billionaire activist George Soros, the son of British fashion designer Vivienne Westwood, the granddaughter of oil magnate John Paul Getty, and the rock band Radiohead, amongst others.