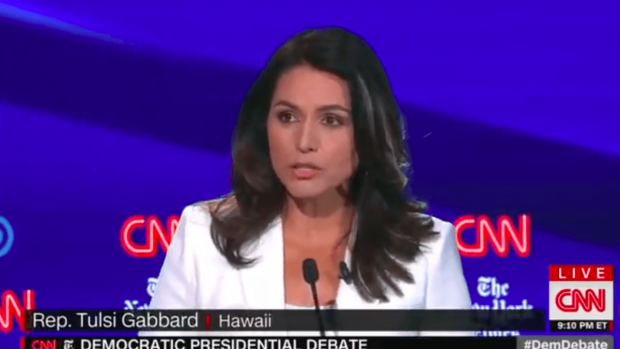 Both equivocated: Warren said that the U.S. should not have a military presence in the Middle East, but that our troops needed to be withdrawn slowly and carefully. Buttigieg asserted that quickly pulling out troops—as President Donald Trump has currently ordered—represents a betrayal of our Kurdish allies, and thus constitutes America breaking its word. (The best way to protect the Kurds would actually be to let them come into this country, not commit the U.S. to an endless war on their behalf.)

Former Vice President Joe Biden later criticized Gabbard, saying that the U.S.'s involvement abroad was not just for the defense of the Kurds, but was intended to tie terrorists down and prevent them from hurting Americans at home. That he initially confused Iraq and Afghanistan did not make his remarks more persuasive.

Indeed, Gabbard was the only candidate on the stage Tuesday night to advocate a unilateral, immediate end to the disastrous policy of intervening in every conflict in the Middle East with the goal of changing the regimes. As she wisely noted, such schemes have backfired in Iraq, Afghanistan, and Libya, and likely would have backfired in Syria if undertaken there as well.

Refreshingly, Gabbard called out both parties and the mainstream media for their complicity in the U.S.'s foolish foreign policy interventionism.

"Just two days ago The New York Times said I was an Assad apologist, an asset of Russia," said Gabbard. "Completely despicable."

As Reason's Christian Britschgi noted earlier this week, the Times' lazy attack on Gabbard relied on "a mix of thin evidence, guilt by association, and conspiratorial framing of actions that any single-issue-focused dark horse candidate is liable to do."