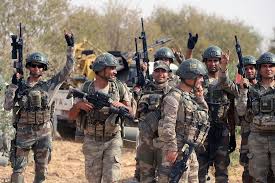 Russia has stationed troops between the Syrian army and Turkish forces in an attempt to prevent fresh clashes in northern Syria.

Moscow said its soldiers are now patrolling land outside the flashpoint city of Manbij, which was taken over by Syrian government forces on Tuesday, to prevent an anticipated Turkish attack.

But the Kremlin failed to prevent some skirmishes around the city, as the Turkish government said one of its soldiers was killed and eight more wounded in a mortar attack. Turkey said it returned fire and killed 15 'terrorists'.

Vladimir Putin has moved quickly to establish himself as power-broker in northern Syria, including striking a pact between the Kurds and Syrian government, after Donald Trump suddenly ordered US forces to withdraw.

Video also emerged of Russian forces occupying a former American base just outside of Manbij, which was hastily abandoned by US forces.