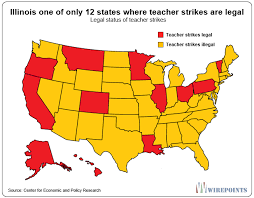 How can they strand Chicago families and children – the very people they are supposed to serve – at a whim?

One of the answers lies in the state's collective bargaining rules. They are among the most anti-taxpayer labor laws in the country. Take strikes, for example. Illinois is the only state among its neighbors that enshrines teacher strikes in its collective bargaining laws. In contrast, strikes are illegal in Wisconsin, Indiana, Missouri, Kentucky and Iowa.

In fact, Illinois is one of just 12 states nationally where teacher strikes are legal, according to the Center for Economic and Policy Research. Strikes in the other 38 states are illegal, either explicitly or because collective bargaining is outlawed to begin with.

If the CTU strikes again this month, as they are currently threatening, it will be the third time in seven years the union has struck over contract negotiations.

In 2012, the CTU struck for one week over a contract dispute with then-Mayor Rahm Emanuel. Ditto in 2016, when the union held a one-day walkout.

Teacher strikes, or the threat of them, have become a standard operating procedure for the Chicago Teachers Union when bargaining new labor contracts.