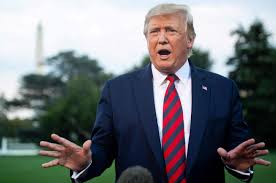 Two and a half months later, on July 22, 2018, Secretary of State Mike Pompeo delivered a speech to a group of Iranian expatriates at the Ronald Reagan Presidential Library, in Simi Valley, California. "[T]he United States," Pompeo said, "is undertaking a diplomatic and financial pressure campaign to cut off the funds that the regime uses to enrich itself and support death and destruction." The crowd launched into generous applause, after which Pompeo delivered his main point. "We have an obligation to put maximum pressure on the regime's ability to generate and move money, and we will do so."

The Trump administration, Pompeo stated, would reimpose sanctions on Iran's banking and energy sectors. "[O]ur focus," he concluded, "is to work with countries importing Iranian crude oil to get imports as close to zero as possible by Nov. 4, [2018]. Zero."

The ostensible purpose of the "maximum pressure" campaign was to get Iran to withdraw from the JCPOA and return to the negotiating table, where a new, more restrictive agreement would be crafted that eliminated its nuclear enrichment program, curtailed its ballistic missile program and reduced its influence in the Persian Gulf. However, given Pompeo's embrace of the regime-change mantra of the Iranian expat community—a sentiment he shared with Trump's then-national security adviser John Bolton—the "maximum pressure" campaign could only be interpreted as an act of economic warfare against Iran, as prelude to an eventual military campaign designed to remove the Shi'a theocracy that has ruled the country since assuming power in 1979. Bolton himself emphasized this when he stated in November 2018 that "[i]t is our intention to squeeze them very hard. As the British say: 'Squeeze them until the pips squeak'."