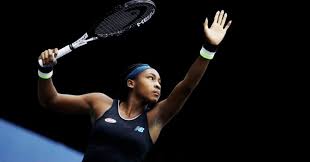 Coco Gauff spent some of this week doing her high school homework, and ended it by taking the first of what will surely be many titles on the main WTA Tour.

By doing so she became the youngest player since the Czech Republic's Nicole Vaidisova in 2004 to win a maiden tour title, and only confirmed the immense promise she showed at Wimbledon and the US Open.

Gauff, who will now enter the world's top 75, actually lost in the final qualifying round for the Austrian tournament, but entered the draw as a 'lucky loser' thanks to a late withdrawal.

En route to the title she defeated world No 8 Kiki Bertens, and held her nerve in Sunday's final after becoming nervous when leading 5-0 in the decider.

After taking in her historic moment, Gauff said: 'I want to thank God for always supporting me like I wouldn't be here without him.