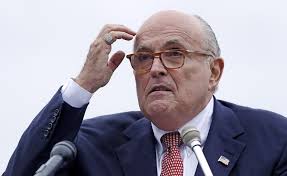 ... and not long after Joe Biden was caught on tape proudly declaring "well, son of a bitch", he got the former  Ukraine prosecutor fired after threatening to withhold aid, it is... Rudy Giuliani who is under investigation for his Ukraine work.

According to a late Friday report by the NYT, federal prosecutors in Manhattan under the US attorney for the southern district of New York — a position that Giuliani himself once held when he effectively destroyed mafia organized crime before becoming mayor of New York - are investigating whether President Trump's personal lawyer Rudy Giuliani broke lobbying laws in his dealings in Ukraine. The investigators are examining Giuliani's "efforts to undermine the American ambassador to Ukraine, Marie Yovanovitch" who was recalled in the spring as part of what the NYT states as fact was "Trump's broader campaign to pressure Ukraine into helping his political prospects", a "fact" which Trump has repeatedly denied.

The investigation into Giuliani is tied to the case against two of his associates who were arrested this week on campaign finance-related charges, and who were charged with funneling illegal contributions to a congressman whose help they sought in removing Yovanovitch.  Lev Parnas and Igor Fruman were arrested on Wednesday as they tried to board a one-way flight out of the US. The charges included allegations Parnas sought to oust Yovanovitch, in part, "at the request of one or more Ukrainian government officials," An attorney for the two men told Congress last week that they had "assisted Mr Giuliani in connection with his representation of President Trump".