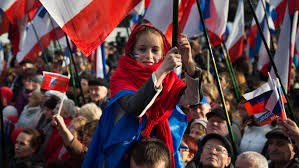 In early August I traveled to Russia for the first time, partly out of interest in seeing some of the vast country with a tourist's eyes, partly to do some journalism in the region. It also transpired that while in Moscow I was able to interview Maria Zakharova, spokeswoman of the Foreign Ministry.

High on my travel list, however, was to visit Crimea and Donetsk People's Republic (DPR) — the former a part of Russia, the latter an autonomous republic in the east of Ukraine, neither accurately depicted in Western reporting. Or at least that was my sense looking at independent journalists' reports and those in Russian media.

Both regions are native Russian-speaking areas; both opted out of Ukraine in 2014. In the case of Crimea, joining Russia (or actually rejoining, as most I spoke to in Crimea phrased it) was something people overwhelmingly supported. In the case of the Donbass region, the turmoil of Ukraine's Maidan coup in 2014 set things in motion for the people in the region to declare independence and form the Donetsk and Lugansk People's Republics.

In March 2014, Crimeans held a referendum during which 96 percent of voters chose to join Russia. This has been heavily disputed in Western media, with claims that Crimeans were forced to hold the referendum and claims of Russian troops on the streets "occupying" the peninsula.