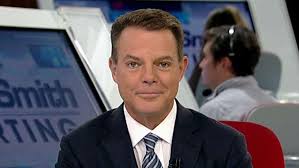 The midday anchor, who had been with the network since its inception in 1996, stepped down from his role as chief news anchor and managing editor of the network's breaking news unit and anchor of Shepard Smith Reporting effective immediately the network said in a release.

He will be replaced by a rotating line-up of hosts until a replacement is selected to take over at the 3pm hour.

'Shep is one of the premier newscasters of his generation and his extraordinary body of work is among the finest journalism in the industry,' said Fox News Media president Jay Wallace.

'His integrity and outstanding reporting from the field helped put Fox News on the map and there is simply no better breaking news anchor who has the ability to transport a viewer to a place of conflict, tragedy, despair or elation through his masterful delivery.'

The decision to exit Fox News was made by Smith, and only Smith, publicists for both the anchor and the network said on Friday.

This move comes two weeks after Smith was openly mocked by Tucker Carlson for calling a attack on one their colleagues 'repugnant.'