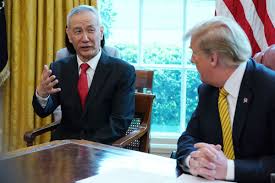 Enforcement being worked out

Deal yet to be put into writing

Markets had solid gains for the week but traders sold the news...

Stocks cemented gains on Friday after President Trump and Chinese Vice Premier Liu He - in a replay of their joint press conference from April (where the two men announced that the two sides were 'close' to a deal, which would assuredly be reached within a brief time frame) - revealed that Washington and Beijing had agreed to what Trump described as a "substantial, 'Phase One' deal.

During the ensuing press conference, Treasury Secretary Steven Mnuchin revealed that Washington would delay tariff hikes that were scheduled for next week (However, Trade Rep Robert Lighthizer said Trump hasn't made up his mind about the hike set for Dec. 15).