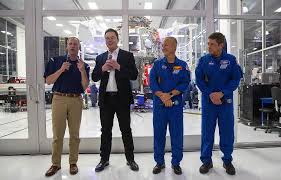 As SpaceX Chief Executive Elon Musk unleashed fanfare about his passion project — preparing to unveil SpaceX's Starship Mars spaceship prototype — NASA Administrator Jim Bridenstine took a rare public jab at him, tweeting that the Commercial Crew program "is years behind schedule" and that his agency "expects to see the same level of enthusiasm focused on the investments of the American taxpayer."

On Thursday, he put a happier face on the situation, standing next to Musk at SpaceX's Hawthorne headquarters and saying he was pleased with what he saw.

"Elon and I are in strong agreement … that the one thing we have under development that is of the highest priority is launching American astronauts on American rockets from American soil," Bridenstine said at a news conference that also included the two astronauts who will be the first to ride in the SpaceX Crew Dragon capsule.

But the fact remains that if neither SpaceX nor Boeing has its capsule ready to fly astronauts on a regular basis by September, NASA will be in a tight spot: It probably would have to buy last-minute seats on a Russian spacecraft, a potentially expensive and politically fraught move.